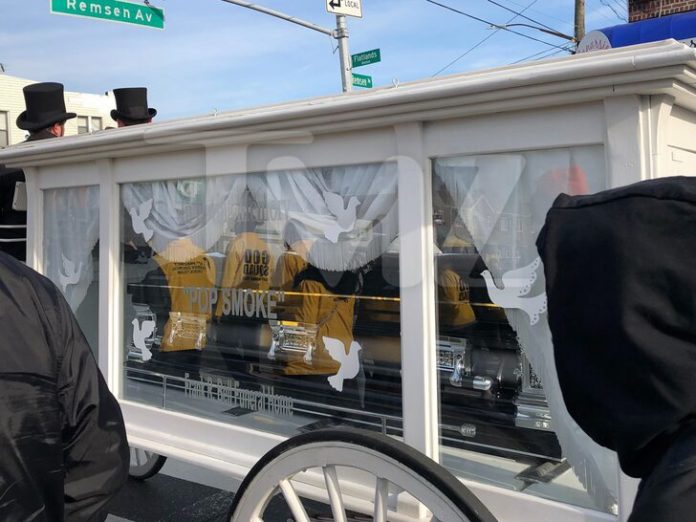 Pop Smoke‘s most ardent fans are out in droves in Brooklyn … giving the late rapper one final, emotional sendoff.

The funeral procession is going down Thursday afternoon in the Canarsie neighborhood of the borough. Two horses are pulling the carriage and hearse, decorated with white curtains … and Pop Smoke’s casket can be seen through the glass.

The carriage made its way past a mural honoring Pop Smoke. There were barricades set up in the mostly residential neighborhood to keep fans on sidewalks. NYPD is also on hand to keep things under control.

TMZ broke the story … 20-year-old Pop Smoke was gunned down last month in the Hollywood Hills in what appeared to be a targeted hit.

He was taken to Cedars-Sinai Medical Center, but doctors couldn’t save him, as he died from a gunshot wound to his chest, according to his death certificate.

Pop Smoke’s family held a private ceremony last weekend for close friends and family. After today’s procession … he’ll be laid to rest in a Brooklyn cemetery.

5 Best Service Dog Breeds For Those With Disabilities Or Medical...

2020 A Record Year For Cannabis Sales

Should Pet Parents Get Time Off To Grieve The Loss Of...

#WeSayThanks Day: 9 Firehouse Dogs Who Stand By Our Firefighters Through...

5 Of The Best Items To Give Your Dog More Personal...

18 Fun Things to Do Alone

September 2, 2020
We use cookies to ensure that we give you the best experience on our website. If you continue to use this site we will assume that you are happy with it.OkPrivacy policy