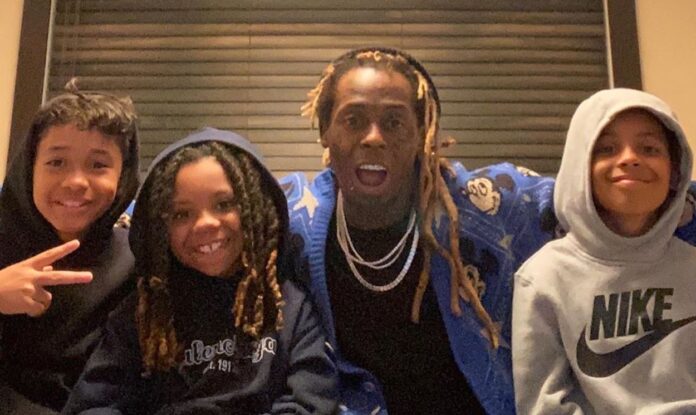 Reginae Carter is a proud big sister to Kameron, Neal, and Dwayne Carter III. The oldest of Lil Wayne’s children, Reginae posted a new picture of the rapper with his young ones, sending them a quick message and having some fun.

Each one of them bears a resemblance to Papa Carter, especially Kameron who looks nearly identical to the legend. In the comments, people are going crazy over how much they resemble each other. The same fans are also saying that Dwayne looks like Reginae, while Neal got some traits from his mother Nivea and Wayne.

Lil Wayne is clearly proud of what his little boys are becoming, taking every opportunity to rave about them.

Last week, the rapper canceled his Young Money Radio show so that he and his fans could observe Juneteenth. Things will be back in order this week though as Tunechi is expected to announce his slate of guests for the Friday show.

He’s been in the news recently because of his new relationship with model Denise Bidot, fawning over her on social media and clearly falling in love quickly.

Do you see the resemblance between Kam and Wayne?

How Do You Get Your Neighbor’s Dog To Stop Barking?

5 Indoor Potty Ideas For When Your Dog Just Can’t Go...

May 12, 2020
We use cookies to ensure that we give you the best experience on our website. If you continue to use this site we will assume that you are happy with it.OkPrivacy policy