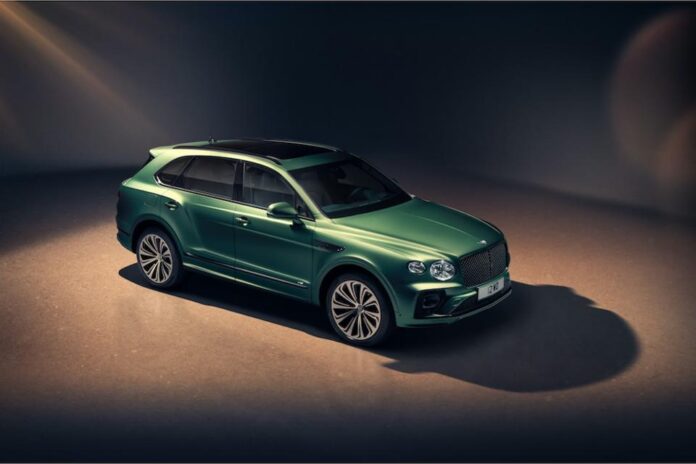 This is the new Bentley Bentayga, details of which were revealed in a pandemic-style digital media launch today. The highly assertive upright matrix grille and intricate light design, housing the marque’s unique cut-crystal detailing, visually link the luxury SUV to the current Bentley family.

Inside, the cabin demonstrates the marque’s artisan skills, with an abundance of handcrafted wood, hand stitched quilted leather on the new seats and precisely engineered tactile chrome elements – all seamlessly executed within a highly technical digital space. And the Bentayga is a genuine off-roader – that is if you’re willing to take such a polished product through muddy terrain.

The Bentayga has been a success story for Bentley with some 20,000 cars sold since its introduction five years ago – these being equally divided between the US, Europe and China – and with 70% of its customers new to the brand. This isn’t surprising as the SUV was introduced precisely to bring in fresh clients – a more global and less traditional audience for Bentley, a bold move which seems to have paid off.

The Bentayga’s beginnings were not so straight forward though. The car passed through a number of iterations and the sketchbooks of almost three design directors. First to tackle the SUV brief was the former Bentley creative boss Dirk van Braeckel, who sketched the first designs before retiring from the realm. The rather brash EXP9F concept, presented at Geneva in 2012, firmly polarized opinion. It just didn’t seem right for Bentley to be that bold – yet.

Following the arrival and abrupt departure of the second creative director, Bentley swiftly brought in one of parent company Volkswagen Group’s star designers, Luc Donckerwolke, to solve the problematic yet promising SUV. Another four years passed before the fully refined design was signed-off by which time Donkerwolke had left for South Korea and Hyundai-Kia. The Bentayga’s grand reveal at the 2015 Frankfurt Show was completed by the marque’s current director of design, Stefan Sielaff who has since also overseen the new visual direction for Bentley.

In reality, introducing an SUV to a classic, traditional luxury marque was never going to be an easy task. At the time, Bentley wisely speculated that there would be a growing market for the highly luxurious SUV since premium makers like Porsche, Audi, BMW, Mercedes had already proved that 21st century SUVs are not so much about splashing through muddy terrain, but doing the school run. Now, of course, every carmaker has an SUV of sort, even Rolls-Royce – the pinnacle of luxury transport. Which brings us back to the 2020 Bentayga, a car that needs to now shine a little brighter in this much more competitive market.

From what I can see without physically navigating the car, the design appears to be expressing the modern Bentley theme. Sielaff and his team have worked incredibly hard to forge a visual family connection and the Bentayga seemed to be the one product which didn’t quite fit in. The new car has a distinctly modern Bentley flavor and feels connected to the Continental GT and Flying Spur, with every panel at the front of the car redesigned for a cleaner, modern look. Sielaff says: “We literally changed most of the exterior and refined the proportions.”

SUVs need to express poise and power and this Bentayga looks even more assertive than the car it replaces. The large grille is positioned upright while the aggressive front bumper expresses the car’s high performance. The rear-end has seen a restyle with its new full-width tailgate and encapsulated lamps. Power is further pronounced through the wide, split tailpipes, while an increase to the rear track width repositions the new wheels in their arches to give the car a pretty commanding stance.

“We spent a long time examining how to improve the proportions and character of the car,” explains head of exterior design JP Gregory, adding that it still needed to be immediately seen as a Bentley but with greater road presence. “The prouder grill and higher, more focused elliptical headlights give a much more modern expression – a real statement of intent.”

Inside, the design team meld tradition and modernity, distilling and evolving values from Bentley’s heritage. There is a new center fascia and steering wheel, door trims and designer seats with ventilation in the rear of the five-seat cabin option. There is more passengers space in the back now with 100mm extra legroom. With a soft spot for Bentley’s artistic quilting, I am excited to see the Mulliner team introduce a menu of patterns and design for customers to specify on the seats and in door elements. “The quilting is accompanied by a micro piping for a modern statement,” adds Sielaff.

Even better, Bentley is encouraging eight sustainably sourced veneers including Koa and Crown Cut Walnut. Finding materials which speak the language of progressive luxury and are therefore kind to our planet is a topic Sielaff is genuinely passionate about. A handsome dark tint diamond brushed 3D aluminum finish trim is also available as an option for the door trims evoking the Bentley matrix grille design. The creation, I’m told, involves an intricate process of brushing the aluminum precisely, from multiple directions, to achieve a contemporary three-dimensional effect.

Power comes via Bentley’s 4.0-liter, 32-valve dual twin-scroll turbocharged V8 petrol engine, which promises supercar performance (542 bhp, 568 lb ft, 180mph top speed, 0-60mph in 4.4 seconds) but lower emissions and fuel economy. The refined efficiency (24.8 mpg combined) is partly thanks to the engine de-activating four of its eight cylinders in suitable conditions, without compromising the drive. More exciting and in tune with our times perhaps, is an ecological hybrid Bentayga which, alongside the performance Speed model, will follow shortly this year.

The Bentayga is also highly versed on all-terrain activities. And although I suspect customers have a dedicated rusty dusty Land Rover parked in their garage for the great outdoor adventures, there is desire in a vehicle with this degree of refinement but built to go off-road and get positively dirty. “We’ve listened to our customers and made improvements to the areas most important to them,” says company CEO Adrian Hallmark, “and the new Bentayga is a thoroughly modern and beautiful extension of the original car’s abilities and achievements.”

China: Physician who raised alarm on coronavirus dies of illness

Neosporin For Canine: Makes use of, Dosage, & Side Effects

Can Your Dog Tell How Long You’ve Been Gone?

July 4, 2020
We use cookies to ensure that we give you the best experience on our website. If you continue to use this site we will assume that you are happy with it.OkPrivacy policy