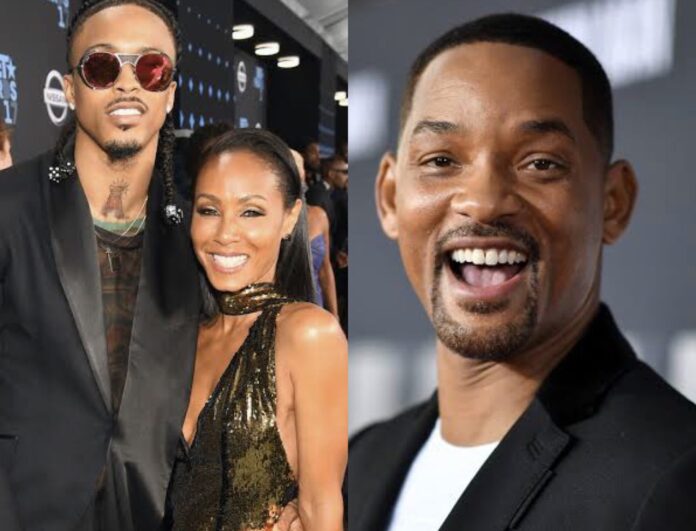 Jada Pinkett Smith broke her silence on Thursday following August Alsina’s claim that her husband, Will Smith, gave the 27-year-old singer “his blessing” to begin a relationship with his wife.

“There’s some healing that needs to happen…so I’m bringing myself to The Red Table,” she tweeted, referring to her Facebook Watch talk show, Red Table Talk.

As ET previously reported, rumors that Jada and August were romantically linked have circulated for some time, with many fans believing that his 2019 song, “Nunya,” was written about the actress. Recently speaking with radio personality Angela Yee to discuss his new album, The Product III: stateofEMERGEncy, August claimed that he’s lost “money, friendships [and] relationships” over the rumors, but has “never” done anything wrong.

“People can have whatever ideas that they like, but what I’m not OK with is my character being in question,” he said. “I’m not a troublemaker. I don’t like drama. Drama actually makes me nauseous. I also don’t think that it’s ever important for people to know what I do, who I sleep with, who I date, right? But, in this instance, it’s very different, ’cause as I said, there is so many people that are side-eyeing me, looking at me questionable about it.”

“I actually sat down with Will and had a conversation,” August claimed. “Due to the transformation from their marriage to [a] life partnership that they have spoken on several times, and not involving romanticism, he gave me his blessing.”

August also claimed in the interview that he “totally gave myself to that relationship for years of my life.”

“I truly and really, really deeply loved, and have a ton of love for her. I devoted myself to it, I gave my full self to it,” he alleged. “So much so to the point that I can die right now and be OK with knowing that I truly gave myself to somebody. I really loved the person that I experienced that [with] and know what [that feels] like.”

“I love these people. I really, genuinely do,” he added, seemingly speaking about the entire Smith family. “I’ve never been in love in that kind of a way. So much so that being intertwined in that way — walking away from it butchered me. I’m shakin’ right now because it almost killed me. Not almost; It did. It pushed me into being another person, my newer self. It. Broke. Me. Down.”

Over the past few years, Jada and Will have both been vocal about being each other’s “life partners.” Last January, for example, they admitted on an episode of Red Table Talk that they don’t celebrate their wedding anniversary.

“It’s more of a life partnership, so it’s not steeped in that day,” Jada explained to viewers of her Facebook Watch series. “We don’t really celebrate that day anymore in the sense because the context of our union is totally different.”

And in July 2018, Will said in an interview with TIDAL’s Rap Radar podcast that he and his wife “refer to ourselves as life partners, where you get into that space where you realize you are literally with someone for the rest of your life.”

“There’s no deal breakers,” he added. “There’s nothing she could do — ever. Nothing that would break our relationship. She has my support till death and it feels so good to get to that space.”

How To Help Your Dog Become A Blood Donor And Save...

April 4, 2020
We use cookies to ensure that we give you the best experience on our website. If you continue to use this site we will assume that you are happy with it.OkPrivacy policy