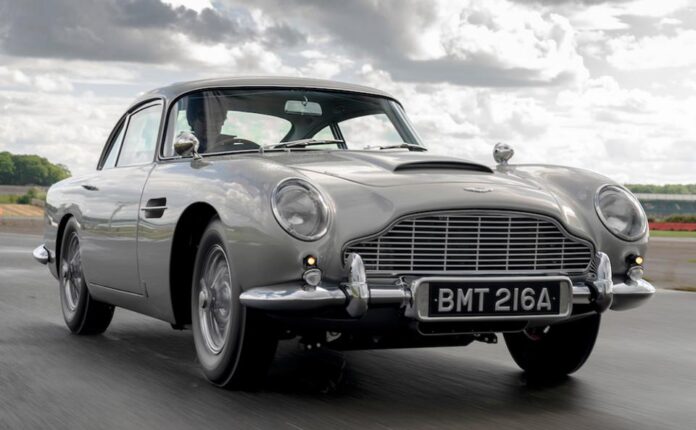 For Aston Martin, this value goes beyond the nebulous nature of enthusiastic customers buying the newest models to sate their personal James Bond aspirations. This value can be precisely measured in the market price of past Aston Martins made famous by 007. And the most famous Bond car — actually, the most famous car of any movie- or TV-related franchise, according to multiple surveys — is the Aston Martin DB5 first featured in the classic 1964 Bond movie, Goldfinger.

Less than 900 original Aston Martin DB5s were produced between 1963 and 1965. And while these models were always associated with the famous Secret Service agent, it wasn’t until the the last 20 years when their market value skyrocketed as Bond fans snapped up surviving examples.

If that amount seems high for a 55+ year-old car, Aston Martin will build you a brand new 1965 Aston Martin DB5 for about half that amount — or around $3.5 million. Actually, they would have built you one if you were in the right place at the right time last year. Now all 25 of these Aston Martin DB5 Goldfinger Continuation cars have been sold, with the first one rolling off the assembly line last week.

While the gadgets in these DB5 Goldfinger Continuation cars were quite advanced in 1965, the basic mechanical foundation of these “new” versions remains vintage. They’re all powered by the same 4.0-liter inline six-cylinder engine (shod with triple SU carburetors) and they all deliver their 290 horsepower through a 5-speed ZF manual transmission. Given these cars’ “vintage” level of emissions control and passenger safety equipment it should surprise no one to learn they are not road legal. You can sit in them and play with the gadgets, but don’t take them on any public roads.

Still, if you’re one of the 25 customers (now 24) waiting for your Aston Martin DB5 Goldfinger Continuation series to roll out of the company’s Newport Pagnell factory, you’re part of an elite group. As the product of 4,500 hours of hand-built construction, with meticulous attention expended to recreate the world’s most famous movie car, you’re going to have one hell of a party prop.

And if for some reason you do decide to illegally drive the DB5 on the street…well, it does have those rotating license plates.

August 27, 2020
We use cookies to ensure that we give you the best experience on our website. If you continue to use this site we will assume that you are happy with it.OkPrivacy policy