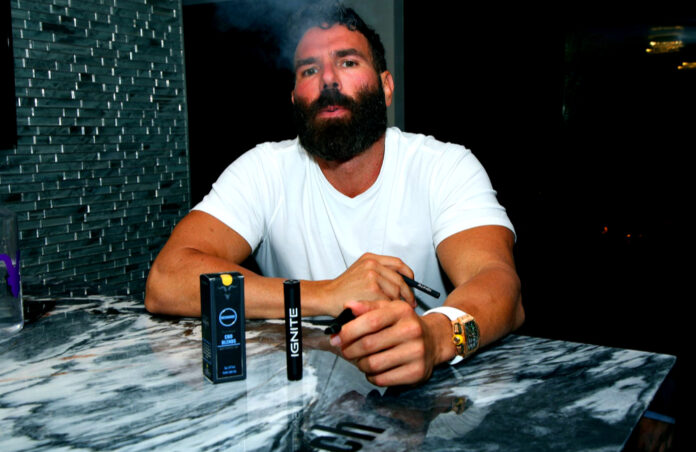 Significant time and resources are invested to remind the world of this, so, here. Check it out. An expensive thing. Too subtle? Here: see Bilzerian, posing near a physical stack of money. He does this often, when he is not photographed on, near, or under a stack of models. Sometimes he combines the two. Anyway, here is some more. Just a few racks, lying around the house!

Such displays are modest. Bilzerian is holding back. Nowhere on his social-media feeds do you see Bilzerian lighting $50 million on fire, which is what the vaguely cannabis adjacent company he founded and serves as CEO, Ignite International Brands, Ltd., did last year.

According to the company’s annual report, filed last month at the Canadian Stock Exchange, where shares of Ignite are publicly traded, the company posted $67 million in losses in 2019.

How did Ignite manage to torch so much money? And aside from Ignite’s investors, and the institutions that offered the company’s line of credit, whose money was it?

Linda Menzel, Ignite’s general counsel, who is listed as the contact on company press releases, did not return several emails seeking comment for this story. But the company’s annual report speaks volumes. So let’s hear what it has to say.

Ignite “made” money in two ways last year. The company issued and sold shares of its company stock, and the company also raised money via debt.

As per its annual filing, Ignite recorded $25 million from “proceeds of issuance of shares,” $19.9 million from “convertible debt,” and $23.7 million from a “short-term promissory note.”

That is, Dan Bilzerian’s company has (had) a lot of other peoples’ money.

With that money, Ignite went on a spending spree, even as its stock tanked.

The company claims to operate in Mexico, Canada, Ireland, and the United Kingdom as well as the United States, where Ignite-branded CBD products are supposedly available in stores.

(Pointless anecdote: I cover weed and CBD for a living. I live in an area absolutely saturated with CBD products. And I do not think I have ever seen an Ignite product out in the wild.)

Ignite hosted lavish parties, threw events, and did all kinds of stuff a company flush with cash does. Parties with platoons’ worth of models are expensive!

In 2019, Ignite lost $43 million on operational costs alone, mostly marketing and promotion, leases on offices, and compensation for staff and executives.

Posting fat losses isn’t entirely unheard of for early stage companies in Silicon Valley, but what is uncommon is how bloated and profligate Bilzerian’s company managed to become in less than one year.

Keep in mind that the company became publicly traded only on Feb. 28, 2019, when Ignite went public on the CSE via a reverse take-over with an almost-dormant metal-trading firm called ALQ Gold, which inexplicably decided to give up on mining and embrace weed, according to filings.

But what a year it was. In 2019, Ignite’s budget for “marketing and promotion” was $22.26 million, or more than twice what the company managed to register in sales revenue.

For every dollar in sales ($9.6 million) the company spends almost two dollars on general and administrative costs ($18.4 million).

This may offer the best explanation yet for how Bilzerian funds the lifestyle, for which he is famous, fame which in turn funds his lifestyle—the “perpetual status machine” at which he is (for now) the center, as VICE put it in 2015.

Complicating all of this is the unavoidable fact that Dan Bilzerian receives at least some of his fortune from his father, Paul Bilzerian, a felon and Wall Street fraudster whom the Securities and Exchange Commission says owes them (that is: owes you, the American taxpayer) $62 million.

But back to Ignite. If the models, yachts, cars, guns, and stacks of cash that populate Bilzerian’s Instagram feed are in any way related to his company—and seeing as the models, and his house, and his jet all bear the goat-horned logo that’s Ignite’s brand, there is a good chance that they are—and are paid for with company cash, the answer to “how does Dan Bilzerian do it?!” is simple.

Like any good businessman, it seems Bilzerian sticks someone else with the bill.

Bilzerian, who owns at least a stake in other companies headquartered in Montana and Nevada, according to public records, also used Ignite as an ATM.

Ignite cash went to pay salaries, licensing fees, business expenses, and travel expenses for companies “owned by the CEO,” according to the report.

How much of all this Ignite chose to share with its shareholders and the holders of its debt until the annual report was released, only the company can say. But it’s fair to declare that the company publicly said it was doing one thing, while it (or Dan Bilzerian, who can say) did another.

“We would look to be cash flow positive certainly in 2020,” former company president Jim McCormick, a former tobacco executive who pivoted to the cannabis sector after 2016, told an interviewer in May of last year. “We run the company very lean and mean.” (Spoiler: They didn’t.)

Compare that sanguine boosterism to the doom and gloom in the annual report. Here’s a telling passage from the company’s directors, who declare that in order to keep going, they will need even more of someone else’s money—and that now is a very bad time to go begging.

“The Company will need to raise capital in order to fund its operations and continue its existing and prospective expansion into strategic markets. This need may be adversely impacted by uncertain capital market conditions, including those created by the COVID—19 pandemic, an inability to secure strategic partnerships in key markets, and an unfavorable perception of the IGNITE brand,” wrote the company’s Board of Directors, before warning investors that the whole thing might be ready to self-immolate.

“Although the Company has been successful in the past in obtaining financing, there is no assurance that it will be able to obtain adequate financing in the future or that such financing will be on terms that are acceptable to the Company,” they continued. “The uncertainty of the Company’s ability to achieve profitable operations and its success in raising additional capital funding may cast significant doubt on the Company’s ability to continue as a going concern.”

That same prognostication—failure is imminent—was also the analysis offered by the accounting firm that reviewed the company’s books.

At least some of the money Dan Bilzerian will use to keep Ignite afloat is also your money. The company reported receiving just short of $1.2 million in Paycheck Protection Program loans from the Small Business Administration. Ignite “intends on applying for loan forgiveness,” the company said.

Okay. An enormous marketing machine, that didn’t really sell anything. A brand, that its own directors worry may be toxic, floated by debt and investors. Is that all there is behind Dan Bilzerian’s company?

“They probably expanded too quickly, had loose spending, bad business decisions — which is common in this space,” she added. “They just look like a failing company.”

Which, in cannabis, is nothing special these days, even if you fail in the finest style.

5 Dog Toys That Are Perfect For Backyard Play Time

Canine Car Illness: Here’s What You Can Do About It

7 Ways My Big Dog Acts Like A Little Lapdog [VIDEOS]

Poison Ivy And Canine: What It Looks Like, Signs, And Treatment

June 25, 2020
We use cookies to ensure that we give you the best experience on our website. If you continue to use this site we will assume that you are happy with it.OkPrivacy policy