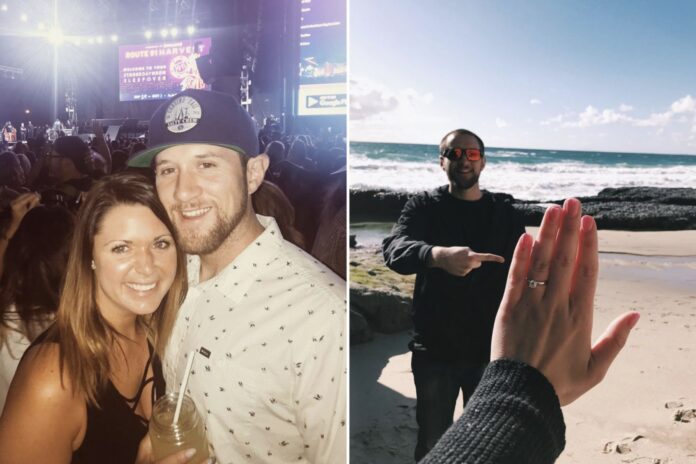 A woman has married the man who saved her life during the 2017 Las Vegas shooting.

Chantal Melanson, from Canada, first met Austin Monfort, from California, on 30 September 2017, when the pair, who were both in Nevada for the Route 91 Harvest festival, found themselves at the same country bar.

According to Melanson, when Monfort first attempted to approach her that night, she initially turned him down as she was out with her friends and he wasn’t wearing cowboy boots.

“I was with my girls and I gave him a hard time for not wearing cowboy boots at a country bar,” the 29-year-old told People.

However, after Monfort asked Melanson to dance, the pair hit it offending the night exchanging phone numbers.

Of their instant connection, Melanson said: “He was so easy to talk to, it felt like we knew each other forever.”

The next night, on 1 October 2017, Monfort texted Melanson to meet him to watch the performances of the final night of the concert together.

While watching Jason Aldean perform, the couple heard a series of loud bangs, which they originally thought were fireworks. The sound was actually from 64-year-old Stephen Paddock firing shots from the 32nd floor of the Mandalay Bay hotel onto the 22,000 concertgoers below.

“We were just listening to music having a good time,” Monfort recalled. “Until we realized that the noises weren’t fireworks, they were gunshots. Then it became, ‘Am I going to survive this, how much longer until police can make it stop, and how do we get out of here?’”

According to Monfort, he felt a “sense of responsibility” to protect Melanson – as she was with him during the deadly mass shooting and not her friends.

“I felt like not only did I have to get myself out, but also her. Keeping her calm and getting her out kept me calm, and didn’t allow me to panic,” he said.

Melanson said she remembers looking into Monfort’s eyes “trying to make sense of everything”.

“Next thing I knew, Austin was holding my hand and we were running through the entire grounds trying to make it to safety,” she recalled.

After the deadly mass shooting, which killed 58 people and injured 800, the couple stayed together throughout the night – before parting ways in the morning to return to their respective homes.

Following the tragedy, Melanson and Monfort stayed in touch, forming a relationship and eventually becoming engaged in March 2019, before marrying in a San Diego courthouse.

According to the couple, who document their relationship on Instagram, they had plans to hold a traditional wedding ceremony but it was postponed due to coronavirus.

However, the pandemic didn’t stop them from celebrating their love.

“Our wedding was supposed to be Friday,” they captioned a photo of what would have been their wedding day. “Although we didn’t have the wedding we still wanted to celebrate us. We had a wonderful evening date in the backyard, with a few of our wedding signs, a wonderful dinner and champagne.”

According to Melanson, the response to their story has been “surreal”.

“It’s been so positive, we love to put a smile on people’s face during such an uncertain time,” she told The Independent. “It’s nice to put light on the positive side of such a devastating night.”

As for their happy ending, the couple has described it as a “fairytale love story”.

“Less than 24 hours after meeting each other we were in a mass shooting together and he never left my side. Almost two years later, living in two different countries, we have a fairytale love story,” Melanson captioned their engagement photo.

Download VuuzleTV on IOS, Android, Roku, or online at Vuuzle.tv See tons of channels and thousands of movies all free! Vuuzle is a premium streaming service that offers live video content such as hit television shows, news, sports, and feature-length movies

Tick Season: What You Need To Know To Keep Your Dog...

Why is olive oil a healthy food?

May 24, 2020
We use cookies to ensure that we give you the best experience on our website. If you continue to use this site we will assume that you are happy with it.OkPrivacy policy