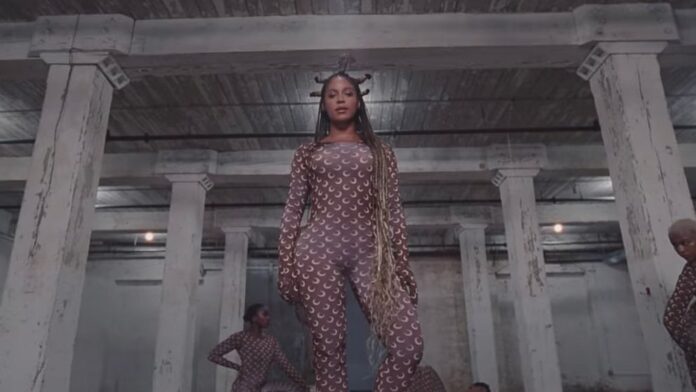 Beyoncé has shared the new trailer for Black Is King, her new visual album inspired by The Lion King: The Gift and arriving on Disney+ on July 31st.

“You were formed by the heat of the galaxy. What a thing to be, both unique and familiar,” Beyoncé says in voiceover. “To be one and the same, and still unlike any other.”

Black Is King arrives two weeks after the one-year anniversary of The Lion King’s theatrical release. “The film reimagines the lessons from the 2019 blockbuster for today’s young kings and queens in search of their own crowns,” Disney said.

As seen in the trailer, Black Is King will feature guests Jay-Z, fellow Destiny’s Child singer Kelly Rowland, Pharrell Williams, Tina Knowles-Lawson, Lupita Nyong’o, Naomi Campbell, models Aweng Ade-Chuol and Adut Akech and many of the artists that appear on The Gift album.

In addition to its July 31st premiere on Disney+, the film also secured a distribution deal that will allow for its showing on much of the African continent, including South Africa, Nigeria, Ghana, Ethiopia, Namibia, Cameroon, Liberia, Burundi, Senegal, Togo, Somalia, Benin, Congo, Kenya, Ivory Coast, Zimbabwe, Malawi, Gabon, Cape Verde and more.

“The voyages of Black families, throughout time, are honored in a tale about a young king’s transcendent journey through betrayal, love and self-identity. His ancestors help guide him toward his destiny, and with his father’s teachings and guidance from his childhood love, he earns the virtues needed to reclaim his home and throne,” Disney previously said of Black Is King.

“These timeless lessons are revealed and reflected through Black voices of today, now sitting in their own power. Black Is King is an affirmation of a grand purpose, with lush visuals that celebrate Black resilience and culture. The film highlights the beauty of tradition and Black excellence.”

Why Summer Heat Can Be Deadly For Brachycephalic (Brief-Muzzled) Dogs

August 10, 2020
We use cookies to ensure that we give you the best experience on our website. If you continue to use this site we will assume that you are happy with it.OkPrivacy policy