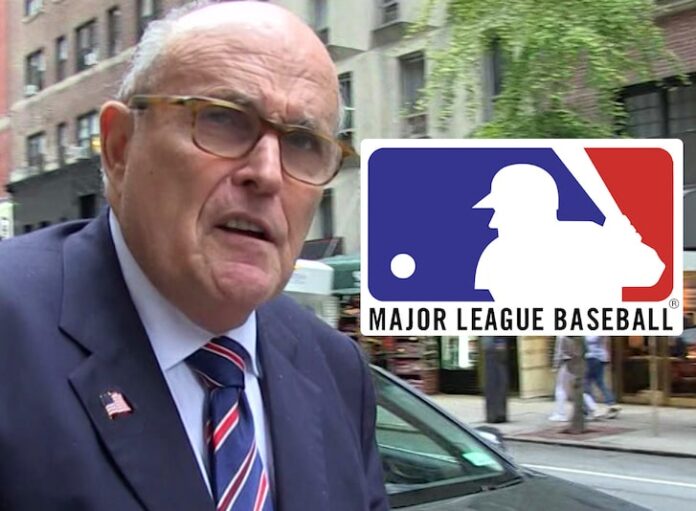 The former New York City mayor and diehard Yankees fan ripped the league Friday morning. Just hours after several players knelt for not only the national anthem, but in support of BLM as well.

Players from both teams kneel together in unity before tonight’s National Anthem. #OpeningDay #NYYforNY pic.twitter.com/ptW2FgfzUe

“All those ball players, including the Yankees, taking a knee during the National Anthem of the country that made them millionaires is hypocritical,” Donald Trump‘s attorney said.

“Support for BLM, which is provoking attacks on our law enforcement and innocent people all over America, is disgraceful.”

As we previously reported, players on the Dodgers, Giants, Nationals and Yankees joined in support of racial equality prior to their Opening Day games Thursday.

The stadium jumbotrons played pro-BLM messages. Afterward, the teams grabbed a long piece of black fabric and knelt with it to show unity.

Some players then went on to kneel for the ensuing national anthem.

Of course, Giuliani’s disdain for it all echoes Trump’s.The President has repeatedly slammed the kneeling protests throughout the last few months. Also recently called the demonstrations “a sign of great disrespect.”
Download VuuzleTV on IOS, Android, Roku, or online at Vuuzle.tv See tons of channels and thousands of movies all free! Vuuzle is a premium streaming service that offers live video content such as hit television shows, news, sports, and feature-length movies

Lamborghini Explains Why It Will No Longer Attend Motor Shows

25 Easter Dog And Puppy Pictures To Make You Smile

Benadryl For Canine: Dosage, Makes use of, And Side Effects

August 11, 2020
We use cookies to ensure that we give you the best experience on our website. If you continue to use this site we will assume that you are happy with it.OkPrivacy policy