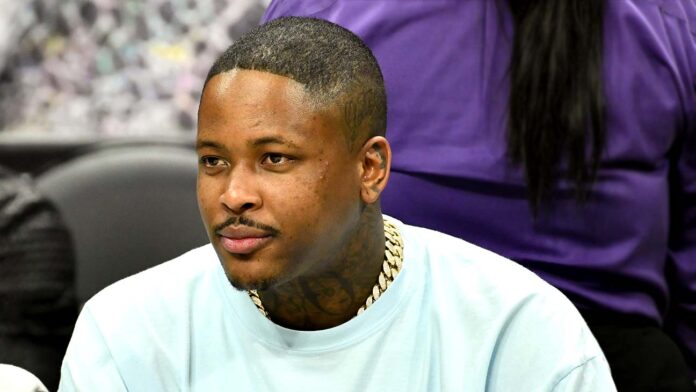 YG was arrested earlier this year at his home in California and the Compton native is now sharing the details of the traumatic experience.

During an appearance on The Morning Hustle radio show on Tuesday (July 28), the 4Hunnid Records founder says that police officers raided his home and drew guns on his two young daughters prior to him being taken into custody in January for a robbery charge. The raid took place just before he performed at the Grammy Awards this year.

“Around the Grammys, I went to jail,” YG explains. “The police came, raided my house—like my house, house with me and my family and my kids. They come through like four in the morning. We sleep, helicopter had come around and all that. So boom, I bounced up like, ‘What’s going on?’ Boom! They bang the door in trying to get in the door. So, I go downstairs, I open the door. Boom! They drew down on me. That’s normal, but my kids at the time were 4 years old and 6-month-year-old. They upstairs in the room with their mama.”

The rapper then says the officers went upstairs after he told them that is where his family was located in the house. “They go up in the room and they got the big AKs all in my little kids’ face like, ‘Don’t move!,’” he recounts. “I’m like, bro, ‘What the fuck is y’all doing? Y’all got me fucked up!’ They doing this to my little kids! And these are little girls!”

YG adds that because of his gang affiliations, he is immune to being harassed by law enforcement. “I been through a lot of other stuff with the police, but I’m from the streets though, you feel me?” he says. “So, it’s like, I got a target on my back already from that and I know that. So, it ain’t really nothing to talk about because it’s like when you’re from a certain area, the police gon’ fuck with you.”

On Jan. 24, YG was arrested and booked at the Men’s Central Jail in Los Angeles with bail set at $250,000 following the police search at his San Fernando Valley residence. He was released shortly after. The raid took place around 4 a.m. after police arrived at his home with a search warrant. YG was charged with robbery, which is considered a felony in California. The details surrounding the robbery are unclear.

However, despite the arrest and being jailed, YG was still able to perform at the Grammys for Nipsey Hussle’s posthumous tribute days later alongside Meek Mill, Roddy Ricch, DJ Khaled, John Legend and Kirk Franklin.

Check out YG discuss the incident around the 4:15-mark below.

The Loss Of Your Canine: What To Expect When It Comes...

How to cook healthy foods

KYLIE JENNER FIRES BACK AT FORBES