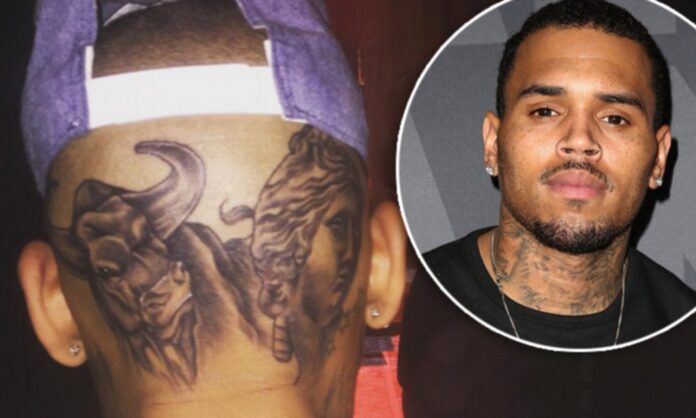 Chris Brown has been steadily adding to his set of ink for years, but he’s really going for the head this time. Brown already has one tattoo on his head, of the ancient Greek statue Venus de Milo, but he’s just added an accompanying piece.  The new tattoo is right beside the Greek statue, and is a barking Doberman baring his teeth with one bulging eye. The menacing tat stretches from Brown’s bottom neck to the upper skull. For now, the piece appears to be colorless, but looks bold with deep black lines and shading.

Allegedly, the dog tattoo is inspired by the logo for Tuff Crowd, a Los Angeles-based streetwear brand. The art was done by celebrity tattooist GANGA, who also constructed Brown’s Jordan sneaker piece. When Brown isn’t getting tatted up, he’s working on Breezy, which will be his tenth studio album. The multi-talented artist dropped off “Go Crazy” featuring Young Thug as a leading single, which is currently sitting at No. 12 on the Billboard Hot 100. As of late, Brown has also been ducking Timbaland’s Verzuz invites and claiming that he could defeat Usher off features alone. The bold claim should be explored, as we’re sure the masses would love to see a Brown VS Usher battle.

Chrissy Teigen and John Legend List Their $24 Million Home as...

Gwen Stefani and Blake Shelton Buy Their First Home Together in...

Dear Labby: I Have Two Dogs Who Mostly Get Along But...

Zendaya Makes History As She Wins Her First Ever Emmy For...

August 6, 2020
We use cookies to ensure that we give you the best experience on our website. If you continue to use this site we will assume that you are happy with it.OkPrivacy policy