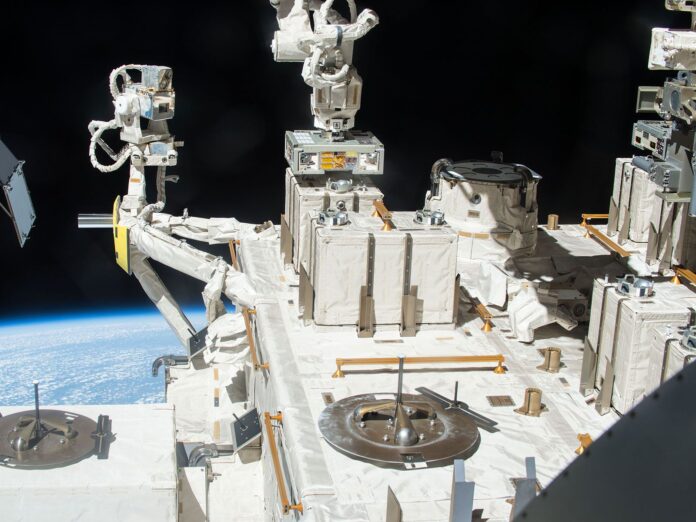 
Framed by an infinite backdrop of dark, lifeless space. A robotic arm on the International Space Station in 2015 mounted a box of exposed microbes on a handrail 250 miles above Earth.

The hearty bacteria had no protection from an onslaught of cosmic ultraviolet, gamma, and x-rays. Back on Earth, scientists wondered whether the germs might survive these conditions for up to three years. The length of the experiment, and if they did, what the results might tell the researchers. About the ability of life to travel between planets.

Microbiologists have spent decades studying extremophiles. Organisms that endure extreme conditions. To tug at the mysterious threads of how life blossomed on Earth. Some extremophiles can live unprotected in space for several days. Others can endure for years, but only by carving out a home inside rocks. These findings underpin the theory that life as we know it can transfer between planets within meteorites or comets. Now, based on that experiment on the International Space Station. Show that the bacteria Deinococcus radiodurans can survive at least three years in space. Akihiko Yamagishi, a microbiologist at Tokyo University of Pharmacy and Life Sciences who led the study. Says the results also suggest that microbial life could travel between planets unprotected by rock.

The study took place outside of Japan’s Kibo lab on the International Space Station. But long before Yamagishi’s experiment made it into orbit. Japan’s Space Exploration Agency, JAXA, wanted his team to convince them it would succeed ahead of time. “We wanted to say, ‘We don’t know. We just have to try it. But this isn’t permitted for space experiments,” Yamagishi says. “So we had to consider how to persuade them.”

Yamagishi and his team had considered several species of bacteria. And Deinococcus radiodurans stood out as exceptional. Between 2010 and 2015, his team ran experiments testing D. Radiodurans against simulated International Space Station conditions. They beamed the bugs with high levels of radiation.

Dropped pressures to a space-like vacuum. And swung temperatures 140 degrees Fahrenheit in just 90 minutes. They found that the cells were remarkably resistant to the barrage of stress. “We showed [the bacteria] will survive by doing these experiments on the ground. And they accepted us and believed us,” he says. The team earned JAXA’s approval. And their astrobiological experiment was set to launch with a SpaceX rocket in April 2015.

A hiccup came to the planned experiment before launch. Originally,Yamagishi and team planned on having astronauts conduct the experiments. But they learned they no longer had the option for “tethered” science experiments outside the International Space Station. Luckily the team was able to design an experiment using that robotic arm.

Three panels of bacteria went up with the SpaceX rocket. One for one year of exposure, another for two years, and another for three. After astronauts readied the panels, a robotic arm controlled from Earth grabbed the panels. And set them in place. Each panel contained two small aluminum plates. Dotted with 20 shallow wells for different-sized masses of bacteria. One plate pointed down toward the International Space Station. The other pointed out toward the cosmos.

Every year, Kibo’s robotic arm unmounted the platform holding the panels. Bringing it back inside the ISS so astronauts could send samples back to Earth for analysis. Their results show that the Deinococcus bacteria survived the three-year experiment. Deinococcus bacteria cells in the outer layers of the masses died. But those dead outer cells shielded those inside from irreparable DNA damage. And when the masses were large enough—still thinner than a millimeter—cells inside survived for several years.

“It reminded me exactly of the strategy that cyanobacteria use in the Andes,”. Says Nathalie Cabrol, an astrobiologist unaffiliated with the study who directs the Search for Extraterrestrial Intelligence (SETI) Institute’s Carl Sagan Center for Research. Cabrol has studied how cyanobacteria, one of Earth’s oldest lifeforms. Endure the intense solar radiation by organizing in layers where cells die on the outside and survive inside. She was pleased by what these results can tell us about extremophiles on Earth.

Beyond just the protective layers of cells in the masses, D. radiodurans. Are remarkably resistant to damage from radiation. Their genes code for unique proteins that repair DNA. While human cells carry about two copies of DNA. And most bacterial cells carry one, D. radiodurans contain up to 10 redundant copies. Having more copies of important genes means the cells can churn out more copies of the proteins that fix DNA damaged by radiation. This inherent defense mechanism, combined with protective outer layers of cells. Kept the microbes alive despite radiation levels over 200 times higher than those on Earth.

Using their data for how each additional year affected cells. The team predicts that traveling D. radiodurans masses could survive two to eight years between Earth and Mars—and vice versa. “So it is possible to survive during transport,” he says. “That tells us that we have to consider the origin of life not only on Earth, but also on Mars.”

Related: NASA Astronaut Kate Rubins is Heading Back to Space

D. radiodurans isn’t the only organism known to survive in space. Previous studies showed that tardigrades last only 10 days in direct exposure. Scientists have also tested Bacillus and Deinococcus bacteria for long stretches in orbit. But only with protection from toxic radiation.

“[Those studies] propose that microbe spores could survive inside rock—that’s lithopanspermia,” says Yamagishi. Lithopanspermia is a variation of the theory of panspermia. Which supposes that life on Earth could have originated from another planet’s microbes. But Yamagishi says his results of extremophiles withstanding direct exposure for years without rocks is cause for a new term: massapanspermia. This theory suggests that microbes may have landed on Earth in clumps, rather than in rocks.

However, other experts are hesitant to embrace massapanspermia.

Related: NASA mission to Mars set to blast off

“I was already kind of sold on the idea that life could have transferred between Earth and Mars,” says Natalie Grefenstette. A theoretical astrobiologist at the Santa Fe Institute not affiliated with the work. Evidence for lithopanspermia convinced her that transferring life is possible. But she sees one major limitation for massapanspermia. Free-floating cell masses would need to survive ejection from one planet and re-entry onto another. “Those are huge requirements,” she says. She suspects a traveling clump of exposed cells would burn up like meteors before landing.

Cabrol also questions the possibility of massapanspermia. “Showing that radiodurans can survive three years if it’s layered is very far away from the numbers. We need radiodurans to be able to make the leap to Mars.”. Although years-long trips are theoretically possible. Scientists estimate that it can take up to several million years for the matter to leave one planet and land on another within the solar system.

“The relevance of this study is less in proving that massapanspermia or panspermia are possible,” says Cabrol. “But to me it shows that we have to be extremely careful with our contamination when we go to Mars.”

Many countries have signed the Outer Space Treaty, which forbids them from bringing (and spilling) microbes on other planets. If a spacecraft were to accidentally spill microbes on Mars. For example, then that would corrupt future missions to find life on the planet. Scientists wouldn’t know with absolute certainty whether they were detecting Martian microbes. NASA went to great lengths to sterilize the Mars 2020 rover. By baking it at sterile temperatures and wiping every part with sterile clothes. This study underscores how surprisingly important it is to keep any spacecraft entirely free of microbes.

Yamagishi hopes to perform more exposure experiments even farther from Earth. Including on NASA’s proposed Lunar Gateway near the Moon. And to advance questions about the origins of life. His team is developing a microscope to search for life below Mars’ surface.

“In environments where we didn’t think life could survive, we know now it can,” says Grefenstette. “This study shows that too—so we constantly push back that barrier of what life on Earth can achieve.”

Dogs 101: Everything You Should Know About Brushing Your Dog

July 21, 2020
We use cookies to ensure that we give you the best experience on our website. If you continue to use this site we will assume that you are happy with it.OkPrivacy policy