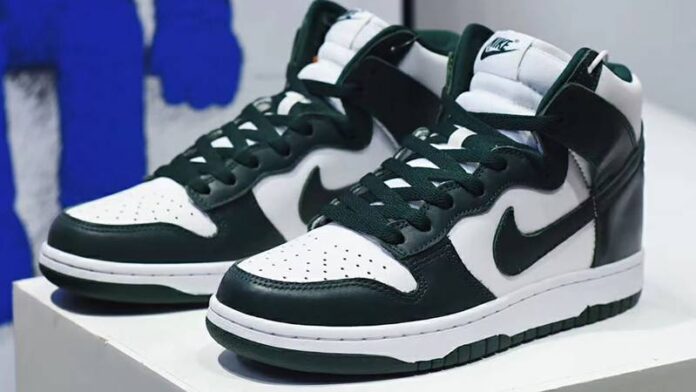 Dunks are having a moment back in the spotlight.

Ever since Virgil Abloh reinterpreted the timeless silhouette last year, there has been a resurgence of interest in the shoe. Nike capitalized on the hype behind the Off-White collaboration by releasing the Dunk Lows in the “Kentucky” and “Syracuse” colorways from the 1985 “Be True to Your School” pack. Followed by more colorways and collaborative renditions.

The colorway itself seems to harken back to the original “Be True to Your School Pack”. With the green and white referencing the “Spartan Green” colors of the Nike-sponsored Michigan State University.

The new release is similar to the beloved 2008 “Pine Green” release, but with a notably darker shade of green. The new iteration retains the same color blocking, with white on the toebox. Tongue, and collar and the darker “Pro Green” on the swoosh, mudguard, and collar flaps.

The release is topped by an all-leather upper with matching “Pro Green” laces, finished with white midsoles and green outsoles.

The Nike Dunk High “Pro Green” is set to release via Nike’s SNKRS app on September 18. Will you be copping a pair?

Escaping Dogs: Why Dogs Try To Escape & How You Can...

A new experiment hints at how hot water can freeze faster...

August 14, 2020
We use cookies to ensure that we give you the best experience on our website. If you continue to use this site we will assume that you are happy with it.OkPrivacy policy