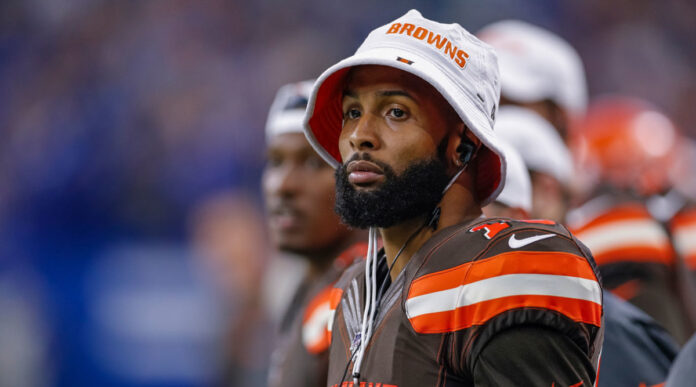 The most recent source of an Odell trade rumor comes from legendary NY radio host Mike Francesa. Who broke the news on his Twitter. Whether or not Mike proves to be right or wrong. Would anyone be surprised that the Browns would be currently shopping Beckham? Again, we already broke down why it isn’t really working.

While it’s unclear what the Browns might be looking to get for OBJ in a trade. There would surely be interested teams in the WR. He’s still an elite talent, despite how poorly it has gone with the Browns. And unless the Browns turn things around quick, these rumors will only get louder as the season goes on. Here are five teams who should make a run at trading for OBJ.

This is the ultimate no brainer. Odell has long talked about how much he admires the Patriots. And his good friend Cam Newton is now the starting QB in New England. They spent all summer working out together, so there’s already some built in chemistry between the duo. The Patriots have been known to be aggressive, so this wouldn’t shock anyone.

The 49ers were one of the other teams trying to get Odell when the Giants traded him to the Browns in 2019. So it makes sense that they would likely be a suitor this time around. This team is currently pretty stacked as is, but explosiveness at WR is still a bit of a need. They aren’t exactly in a great spot with the cap. But teams tend to figure that sort of thing out when going after high profile players.

Feels like Eagles fans have been calling for their team to trade. For every available star who comes available via trade. Odell would be no different and is a guy who could really help an offense that is in need of playmakers. Let’s get Carson Wentz some help and send Odell back to the NFC East. That would be fun.

The reports of Aaron Rodgers’ demise have been greatly exaggerated. In fact, he looked like the best version of himself against the Vikings week 1. After the Packers decided not to add any WRs during the draft. Would they look to go all-in with Rodgers this year and add OBJ to a WR group that already includes Davante Adam? Have fun stopping that offense.

The Rams just opened up a brand new stadium (that no fans can go to). And need to keep the LA market entertained whatever way they can. We all know Odell is ready for the spotlight of Hollywood and who wouldn’t want to play in Los Angeles? From a football standpoint, the Rams would be smart to add Odell to their core. Especially after Todd Gurley and Brandin Cooks left town this offseason. Time to add some firepower to that Sean McVay offense.

Why is Holiday Insurance Important?

Hydrocortisone For Canine: Makes use of, Dosage, & Side Effects

Twitter Is Dragging Kylie Jenner Because She Has “Had Enough of...

September 16, 2020
We use cookies to ensure that we give you the best experience on our website. If you continue to use this site we will assume that you are happy with it.OkPrivacy policy