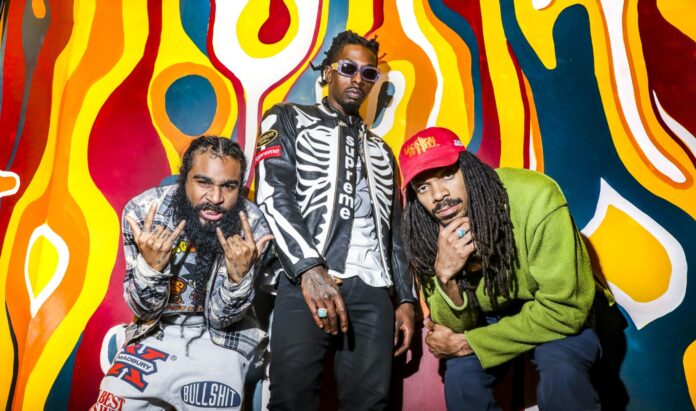 
Flatbush Zombies’ new track ‘Afterlife’ sees the Brooklyn rap trio team up with James Blake for the first of a number of collaborative tracks.

Over the UK producer’s sinister synths and bone-chilling bass, broken up by a silvery and celestial piano arrangement, the Zombies wax lyrical about winning and sinning as they try to maintain morality in the face of impending doom.

We caught up with Meechy Darko, Erick The Architect and Zombie Juice to discuss working with Blake, the Black Lives Matter movement and their thoughts on the shifting culture of hip-hop.

How did you guys come to work with James Blake?

Erick: “I’ve been a fan of James for quite some time. I remember hearing ‘I Never Learnt To Share’ and being like, ‘Damn, who the hell is this guy?’ Then he did an interview and shouted us out, so I reached out to him and we started to text. From there, he came to see us perform at The Novo in L.A. and then I invited him to see [Tyler, The Creator’s] Camp Flog Gnaw Carnival with us. We cut some songs together and then agreed we’d go back to New York for a week to meet the other two guys and make this project.”

Are you doing a whole project together?

Erick: “I don’t wanna talk too much about it because I don’t wanna put a deadline on something, but I will say that we’ve recorded about 20 songs with him. So it’s definitely not an EP, it’s something larger, and I think it will be revered as the Zombies’ next album.”

Erick: “Well, James did a heavy load but myself and Dominic [Maker from Mount Kimbie] pitched in with production. It’s all of us really collaborating, you know? So it’s like one of us would give an idea and we’d try to build around it. A lot of the songs were created that way. I might have started it and James finished it or vice versa.”

What did you take away from working with James?

Meech: “He really understands voices and where they should be placed. There was one verse I did where I came off mad aggressive – as usual – and he was like, ‘I think you should just calm it down a little bit,’ and I was like, ‘Nah, I wanna talk to these n***as, bro.’ Then I started doing the verse again and I looked at him and I said, ‘Alright, I’m gonna do it your way’. And I did it his way and it actually came out sounding a lot better because he just knows how best to utilise your voice. I don’t think people fully understand the capabilities of that man, especially when it comes to making and producing for hip-hop artists.”

On ‘Afterlife’, Erick raps: “Paranoid when I’m countin’ every dollar/ ‘Cause tomorrow ain’t promised when you’re black.” It’s very timely given the recent killings of George Floyd and Breonna Taylor.

Erick: “I wrote it over a year ago, so it’s sadly ironic that it can come out now and have so much relevance with what’s going on; these brutalities by these cops are not new. It was something that was on my mind then and us putting it out now is really a flag in history to say, ‘Damn, the Zombies really know what’s going on’. And you can attach it to any of these murders unfortunately.”

Have you taken part in any of the Black Lives Matter protests?

Meech: “Yeah, I went outside and did my thing. There’s many layers to the discussion regarding the protests: who’s organising it? What are we out here for? Where are the leaders at? We could have a whole interview on that shit alone, but I definitely went out to support and be a part of it. We also donated a lot.”

Meech: “We sacrificed our last project for the people.”

Erick: “Music is becoming like tourism in the way that people just buy a ticket, hop into a place, absorb what they want and then go back home. I was talking about hip-hop music but I said music because I guess there’s a bigger issue.

“We come from a time where music was your life – there was no touring it. It was where you lived, it was your home. Music shouldn’t be something that’s manipulated. Home is music; tourism is vacation. Music is a very serious thing to me because it saved all of our lives. We have respect for the culture and the genre so much that we would never treat it like tourism; we know where we live.”

Because of that lack of care, a lot of talented artists are often unfairly criticised online. Why do you think that is?

Meech: “It’s because hip-hop is the biggest genre of music right now. There are so many onlookers and I think we’re holding the opinions of outsiders way too high. Because back in the day, guess what? There were a bunch of people who hated 2Pac and Snoop [Dogg], and people thought their music was disgusting. But they’re legends now and they’re some of the most important people who ever lived.”

Juice: “It’s sad, because they’ll be so critical of the guys that really put a lot behind their music and then they’re less critical about the people that just go out there and say ‘kill n***as and fuck bitches’ on every song. It’s nonsense and you just can’t buy into that shit.”

Those unqualified opinions often leak into more serious topics, like the recent situation involving Tory Lanez and Megan Thee Stallion and people calling her a ‘snitch’ for speaking out. What were your thoughts on that?

Meech: “It’s because they’re the outsiders. They don’t understand the street code, they don’t understand shit. They’re not from this world. They’ve never read a Don Diva magazine. They don’t know anything about indictments or how any of this shit works. It’s about right and wrong. It’s about justice, law and order, and due process. I don’t want no n***a shooting no woman – at all. Any n***a that shoots a woman is a pussy. We do not condone that. Any n***a that condones that shit and works with people like that and openly makes fun of it and thinks it’s a joke, we don’t fuck with that. I only think it’s a joke to them because it’s a black woman getting shot. These black women and black artists are just entertainment to them. These n***as don’t love Meg.”

A number of artists have started performing live again even though the pandemic is still in effect. Are you guys considering getting back on stage anytime soon?

Meech: “The only way I’d do that shit is if me, Erick and Juice are in our own hyperbolic tank and there’s scientists there to make sure it’s spotless and the most perfect show ever so that we can say we did the best mother fucking show ever and no one ever got sick and it was 100% germ-free, but I don’t got the money for that so it’s not happening.”

The characteristics of a good health insurance plan

Dogs 101: Everything You Should Know About Dog Shampoo

BRITNEY SPEARS K-FED NOT WORRIED ABOUT HER WITH KIDS

July 27, 2020
We use cookies to ensure that we give you the best experience on our website. If you continue to use this site we will assume that you are happy with it.OkPrivacy policy