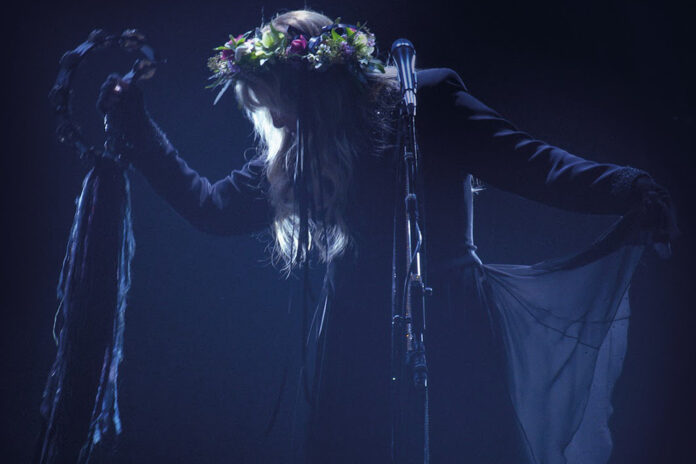 
Stevie Nicks has announced a new concert film set to screen in movie theaters for two nights only in October.

Filmed in 2017 during Nicks’ 24 Karat Gold Tour, 24 Karat Gold The Concert sees the iconic singer delivering beloved hits and rare gems from throughout her storied career as both a solo artist and member of Fleetwood Mac. The film’s set list includes classic songs like “Rhiannon,” “Stop Draggin’ My Heart Around,” “Edge of Seventeen,” “Stand Back” and “Landslide.”

The singer also provides rare insight to her music throughout the movie. Discussing the inspiration behind many of her legendary songs. “The 24 Karat Gold Tour was my all-time favorite tour,” Nicks proclaimed in a press release. “I not only got to sing my songs, but I was able to tell their stories for the first time. I love having the opportunity to share this concert with my fans.”

You can watch the trailer for 24 Karat Gold The Concert below.

The film will be released theatrically worldwide for two nights only on Oct. 21 and 25, screening at select movie theaters, drive-ins and exhibition spaces. Tickets go on sale Sept. 23 at StevieNicksFilm.com. The website also provides the most up-to-date information regarding participating theaters.

In addition to the movie, a companion live double album will be released Oct. 30. The two-CD version will be available exclusively at Target stores. While the digital version will be released on most major streaming platforms the same day. It will also be available on vinyl, with a limited-edition “Crystal-Clear” version sold exclusively at Barnes & Noble.

In anticipation of the album, Nicks released a new live version of the Fleetwood Mac favorite “Gypsy,”. Which is available for streaming now.

This album is a logical next step after Fleetwood Mac’s Tango In the Night. Between its sparkling production gloss (courtesy of Rupert Hine, known for his work with the Fixx and Howard Jones) and emphasis on lacquered synth-pop layers. And while the album was a massive U.K. hit (and spawned the No. 1 rock radio track “Rooms on Fire”). Nicks’ personality and whimsical lyrics are subsumed by the formal (and now dated) sonic approach. A duet with Bruce Hornsby feels awkwardly stitched together. While “Cry Wolf” is anemic piano-pop — a reminder that even though Tango boasted strong pop DNA. The source material of The Other Side of the Mirror isn’t quite as strong.

Street Angel starts off on a high note with the single “Blue Denim,”. A typical bewitched Nicks rocker featuring roadhouse-riot Mike Campbell guitar licks. But the album suffers from “too many cooks” syndrome: Nicks didn’t like Glyn Johns’ production approach or the resulting music. Brought in Thom Panunzio and her usual musical foils to clean things up and right the ship. Unfortunately, Street Angel never quite got there, Nicks admitted in a 1994 interview. “I should have gone back in and really worked with the album, with the vocals. I guess that was the last thing that I knew was wrong with it. After being in two months trying to fix everything that I thought was wrong about the music and the mixes, it was almost kind of like, you know, maybe you just need to let this go and go on.” The record’s promise is evident in moving songs such as the country-folk tune “Rose Garden,” a self-aware lament about a romance that never led to marriage, and the mandolin-brushed, radio-ready “Maybe Love Will Change Your Mind.”

A collaboration mainly with Eurythmics’ Dave Stewart, In Your Dreams is one of Nicks’ most adventurous-sounding albums. The title track is hot-rodding power-pop; “Wide Sargasso Sea” hews toward psychedelic rock; and “Soldier’s Angel,” which features Lindsey Buckingham’s inimitable guitar and vocals, is sparse and haunting. But Nicks’ lyrics on In Your Dreams also include some of her most introspective insights. Look no further than the one-two punch of “New Orleans”. A lovely mash note to the city post-Katrina — and “Moonlight (A Vampire’s Dream),” a song about seductive romance that’s inspired partly by the Twilight: New Moon movie, and partly by thoughts dating from the ’70s.

Tom Petty helped Nicks get in the proper headspace to make Trouble in Shangri-La. “Basically, he said, ‘You know that you’re a good songwriter, Stevie, and I don’t know what’s getting in the way right now. But you just need to go home and go straight to your piano,’” she told Time Out New York. “I was having a hard time getting over the Street Angel experience. I was just really sad. That dinner made all the difference. I give Tom all the credit in the world for this record.”. Nicks should also give herself credit for a solid comeback effort inspired by her past and present. The title track coalesced in late 1994, while the piano-driven “Love Is” was written in January 1995. And Nicks shared that she wrote tunes while on tour with Fleetwood Mac in 1997. The mandolin- and string-adorned “Candlebright” and the mystical. Folk-tinged “Sorcerer” dated from her days in Buckingham Nicks — a delightful nod to one of the most underrated periods of her career.

The spunky Rock a Little continued Nicks’ streak of rock radio hits: The album kicks off with “I Can’t Wait”. A glass shards-sharp slice of synth-pop — and later features the glossy, moody ballad “Talk to Me.” In between, Rock a Little finds Nicks sounding more comfortable in the role of pop star, what with the smoky, soulful “Some Become Strangers” and keyboard-zapped “The Nightmare.” Unlike other ’80s albums, where the production values have aged poorly, Rock a Little is still enjoyable listen today.

Odds-and-sods collections tend to be jumbled, hit-or-miss grab bags. Nicks’ vast song vault, however, yielded an album full of dazzling gems. 24 Karat Gold: Songs From the Vault comprises newly finished versions of song demos spanning between the ’60s and the ’90s. Highlights include “Starshine “— a tune she reportedly wrote in Tom Petty‘s basement in 1980 that features the Heartbreakers’ trademark bar-band stomping. The fierce rocker “I Don’t Care,” and a dreamy Bella Donna castoff, “If You Were My Love.” The result is a quintessential Nicks album, eclectic and poetic, that alights on rock, pop, folk and all points in between.

The Wild Heart delivered two classic Nicks hits: the empowerment anthem “Stand Back” and “If Anyone Falls.”. And while the album features some of the same musicians that appeared on Bella Donna — for example, “Enchanted” features some trademark Roy Bittan jaunty piano, and the sinewy blues-rocker “Nightbird” includes Tom Petty and some Heartbreakers — the album has more prominent synth work, which gives it a contemporary sheen. The juxtaposition at times can be a little jarring. Though it’s a minor quibble, as The Wild Heart reinforces Nicks’ mettle as a songwriter.

Nicks set the bar rather high with her debut solo album. Which topped the Billboard album chart and spawned the indelible hits “Stop Draggin’ My Heart Around” (with Tom Petty and the Heartbreakers), “Leather & Lace” (a Don Henley duet) and “Edge of Seventeen.” As might be expected, Bella Donna‘s sound is influenced by Nicks’ collaborators, which, in addition to Petty and the Heartbreakers, include E Street Band member Roy Bittan, and session whizzes Waddy Wachtel and Donald “Duck” Dunn. The album is a bold declaration of Nicks’ distinctive voice, independent from Fleetwood Mac. And it remains one of the best rock debuts of the ’80s.

8 Ways To Protect Your Dog From Coyote Attacks

Mineral Oil For Canine: Makes use of, Dosage, & Side Effects

Men’s Leggings Are Evolving Beyond the Need for Dick Towels –