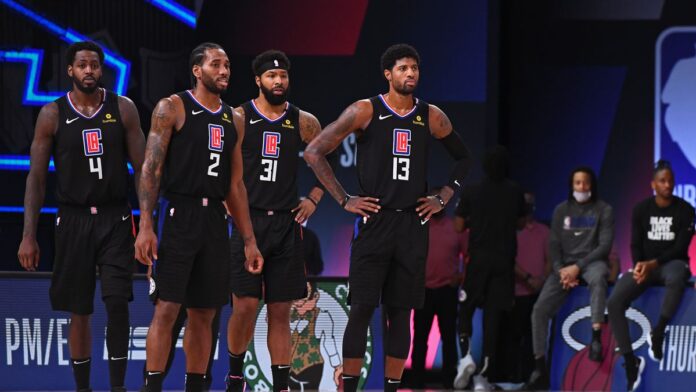 
Do you praise the performance of the underdog or do you bury the team many believed was the NBA’s best. After they were embarrassed in Game 7 and choked away a golden opportunity?

It’s always easier to pile onto the loser. But the Clippers deserve to be ridiculed and ripped to shreds for one of the worst performances in an elimination game in recent playoff history. After they showed no fight—again—against the Nuggets Tuesday. So here goes.

The record will show the final score was 104-89 of the deciding game of the Western Conference semifinals between Denver and Los Angeles. But it felt like the Nuggets won by twice as much as they blew past the Clippers in the second half for the third straight game and emphatically completed a historic comeback. Becoming the first team in NBA history to come back from a 3-1 deficit twice in the same postseason. Next up, the Lakers, the team everyone thought the Clippers would face in the Western Conference Finals to determine NBA supremacy.

The only problem is the Clippers. A franchise known for its ignominious postseason history that appeared poised to rewrite it this season, stunningly choked. Like disturbingly choked. It was hard to watch them forget how to play high level basketball. Painful seeing such a talented team implode before our eyes. And whimper its way out of the bubble.

A squad as stacked like LA—featuring a superstar in Kawhi Leonard, a top-tier No. 2 in Paul George, and a loaded supporting cast—should never have gagged a series like it just did. But it turns out these Clippers aren’t cut from the same cloth as the Nuggets. Celtics, Heat, and Lakers—the four teams still standing. And I can’t believe I’m writing that.

Sure, the superb duo of Nikola Jokic and Jamal Murray deserves plenty of praise. Because, god damn, they were brilliant in Game 7. Jokic, by far the best player the entire series. Had a triple-double by the third quarter while Murray finished with a scintillating 40 points. Let’s also give props to the Nuggets supporting cast who ate off of Jokic’s incredible passes all night long. Like Jerami Grant and Paul Milsap who drained big threes. Denver played awesome.

They rose to the occasion when nobody. Including Las Vegas that made the Clippers 7.5-point favorites in this game—thought they’d get the job done. They were the tougher, more rugged squad—unafraid to take a punch. Like they did early on in Game 7, and punch back. The Clippers, shockingly, showed zero fight and shrunk like a tough-talking boxer. Getting bullied in the ring for the very first time.

Leonard and Paul will catch plenty of blame and its 1,000,000 percent deserved. They combined for a paltry 24 points in an elimination game. And didn’t come close to leveling up with Denver’s dynamic duo. But let’s be real here: this Clippers’ debacle was a team effort. Maybe some of the guys really were ready to go home and get the hell out of the bubble. Because how else do you explain one of the best defensive teams in the NBA no-showing in the second half of Games 5, 6, and 7?

And how do you wrap your brain around a team full of shot makers and big shot takers basically disappearing? Nobody on LA could make a bucket when it mattered—even when they got good look after good look. And for a team of the Clippers caliber, with scorers like Leonard, George, Lou Williams, and other deep threats, it was startling to see a steady stream of bricks. How did they all of a sudden morph into a lottery team?

“Right now it’s just disappointing,” Clippers coach Doc Rivers said after the game. “Honestly, I thought you could see the difference in two teams. That team had been together. We haven’t. And you could see it as the games went on.”

Rivers isn’t one to make excuses and he said he’d take the blame for the Clippers choke job. But he’s not wrong for bringing up a legitimate reason why the Nuggets survived and advanced and the Clippers didn’t. The only thing holding back Los Angeles from being true juggernauts many. Including yours truly—thought they’d be all season long was continuity. A massively revamped roster from last season dealt with injuries that often prevented the full squad from practicing and developing vital chemistry. It started in training camp and bled into the bubble. Leonard and George, in their first year LA, didn’t play a ton of minutes together. Patrick Beverley, the heart and soul of the Clippers. Was injured early in Orlando and the intermittent absences of Williams and Montrezl Harrell while down in the bubble also didn’t help matters.

“The more chemistry for this group the better,” George said after the game. “I think that’s really the tale of the tape. We just didn’t have enough time together.”

But that’s an excuse plenty of basketball fans aren’t going to buy and the Clippers. Loaded like never before and legitimately taking aim at their Staples Center rivals for Los Angeles basketball supremacy for the first time—came up sickeningly small during the season’s biggest moments.

Maybe the pressure low-key got to them. The Clippers denied it after the game. But you can easily make the case the Clippers had more of it placed on them than any team in the NBA heading into the playoffs. Even greater than LeBron James, at age 35 and in his 17th season. Trying to lead the Lakers to another title.

Considered by plenty of NBA observers as the favorites to win it all since they had, on paper. The most versatile and dynamic roster in the Association, we all assumed the Clippers would easily advance to meet the Lakers in the Western Conference Finals. Winner of that series could, in theory, cakewalk to a title. We all know the Clippers went all in last summer when it mortgaged its future to acquire Leonard and George. Both egregiously went AWOL in the fourth quarter of Game 7—for only two years of guaranteed combined service and serious title run. Chemistry issues, horrendous defensive lapses, and an inability to make simple shots means the Clippers just wasted Year 1 of the Kawhi & PG Experience. And they didn’t even sniff the NBA Finals.

All they had to do was play hard, play efficient—basically play like they had during the majority of their regular-season. Wins—one time in the second half of the final three games against Denver and they could face the Lakers. First conference finals. Showdown with your city rival who you almost beat three out of four times this season. And it would come in a neutral setting so the Lakers wouldn’t have seven home games. Because we all know purple and gold supporters always take over Staples when the two teams play.

I always felt like the Clippers were the NBA’s best team. Built for a title run with a championship-winning coach and an extremely versatile roster that I sincerely believed was superior to the Lakers, anyone in the East, and certainly the Nuggets. Instead, the 2019-20 Clippers will forever be remembered as chokers. And we’ll never get to definitively settle the debate about what LA squad really was the better one this season. Props once again to Jokic, Murray, and the entire Denver squad for an incredible comeback. But you can’t bury the Clippers enough for blowing this.

This Music Test Spans Four Generations, We’ll be Impressed If You...

PS5 Preorder: Where To Buy The Consoles, Games, And Accessories

August 26, 2020
We use cookies to ensure that we give you the best experience on our website. If you continue to use this site we will assume that you are happy with it.OkPrivacy policy