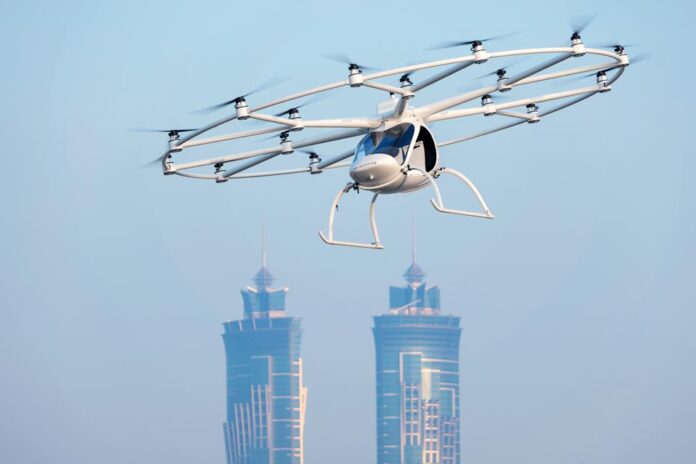 Sure, a 15-minute ride will ultimately set you back $354. And yes, you will likely have to wait at least two years before you actually take your flight.

But just imagine the bragging rights of being among the first to ride on German startup Volocopter’s first public electric air taxi. You can reserve a ticket online for a “VoloFirst” flight with a 10% deposit on the €300 ticket price — that’s just $35 to hold your place.

Interested? Don’t dither too long. There are only 1,000 pre-sale reservations available for a limited time, according to a Volocopter statement. (There were 828 tickets remaining as of 3:15 pm ET.)

The idea of futuristic flying cabs that carry passengers short distances over urban areas has definitely picked up steam in recent years. All-electric, zero-emission eVTOL (electric vertical take-off and landing) aircraft can hover, take off and land vertically like helicopters, but they are based on drone technology and are much quieter and environmentally friendlier.

Dozens of companies — including Boeing, Airbus and Uber — are all working on their own eVTOL prototypes as a way to alleviate traffic and pollution in congested cities. But it looks like the first commercial eVTOL service will be Volocopter, whose two-seater aircraft will be capable of traveling just under 19 miles on each charge and, flying at altitudes of 330 feet, will be virtually silent to people at ground level.

The ticket announcement follows Volocopter’s successful demonstration flights in Stuttgart, at Helsinki’s international airport, and over Singapore’s Marina Bay. “Based on our public test flights and regulatory achievement record, we have paved the way to make electric flight in cities common in just a few years,” per the statement.

The $354 ticket price includes a 15-minute Volocopter flight scheduled within the first 12 months after commercial launch, a video of your flight and a “limited edition, personalized certificate.”

Reserving a ticket also gets you on the notification list to receive updates on the company’s progress and commercial launch plan as you await your departure date.

Why Summer Heat Can Be Deadly For Brachycephalic (Brief-Muzzled) Dogs

DABABY MADE A POWERFUL STATEMENT ABOUT POLICE BRUTALITY IN VMA DEBUT...

Movie Of The Week: Going Shopping

May 26, 2020
We use cookies to ensure that we give you the best experience on our website. If you continue to use this site we will assume that you are happy with it.OkPrivacy policy